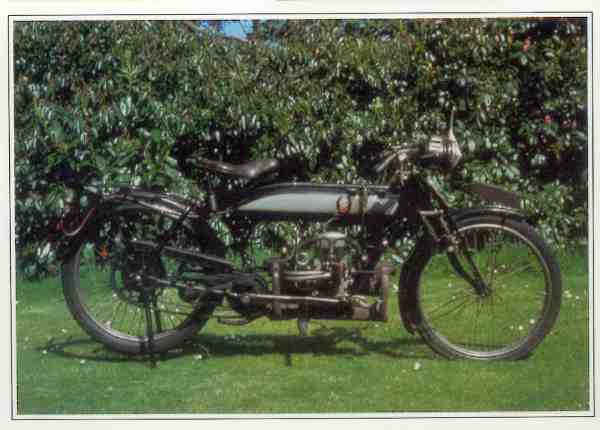 Capacity : 500
Model : Boxer in line (EN)
Production : 1914 - 1914
Category : (R) Street Bike
ABC
500 cc Flat twin - 1914
The beginnings of a revolution
A visionary engineer, Granville Bradshaw designs mechanics that are ahead of their time over the course of their lives. Joined ABC (All British engine Company) in 1910, he settled on the Brooklands racetrack where he exercised, for the first time, his skills as a preparer on a motorbike that reached 117 km/h.
Bradshaw's first motorcycle
In 1913, at the age of 26, Bradshaw built his first motorcycle engine, a long flat twin with remarkable characteristics : square dimensions, overhead valves, turned steel cylinders and a crankshaft with three crankpins with one of the two connecting rods fork to avoid cylinder offset. The tests, with an OK frame give 128 kmh and the license is sold but the project does not succeed. Failing to find a client for its engines, Bradshaw made his own motorcycle, the ABC, in 1914. It was a twin cylinder in line significantly simplified compared to the first of which he kept the dimensions. The cylinders are still made of steel but the valves are, this time, opposed.
Revolutionary frame & suspensions
As a prelude to the famous 1919 ABC with transverse engine, the cycle part of this 1914 model is already revolutionary. The front suspension is parallelogram (conventional springs on the first then spring leaves in 1916) and the rear already uses a swing arm supported on spring leaves, arranged just above rear arm, in 1914, then, behind the tank in 1916. Bradshaw also took the opportunity to invent the constant tension chain by placing the box in the axis of the swingarm. In 1916, Bradshaw relaunched, for the army, a small series of its 500 with its new suspensions, but the majority will be shipwrecked on the road of Egypt where the war sent them!
Air-cooled, flat in line - 4-stroke twin-cylinder 494 cc (68 x 68 mm) - Opposed valves - Detachable cast iron cylinder heads, steel cylinders - Magneto ignition - Primary and secondary transmission by chains - Albion 3-speed gearbox - Kick start - Single cradle frame split - Suspensions F. with parallelogram, R. swing arm with leaf springs - Brakes F. with skates, R. on pulley - 28 x 2.5 tires.
This 1914 ABC in perfect condition is one of the very few known copies of the first Bradshaw.
Le fichier Moto Passion réalisé par François-Marie Dumas réunit près de deux mille photos accompagnées d'un historique très complet des machines présentées.
Il sera progressivement mis à jour ici et toute information complémentaire est la bienvenue sur info@moto-collection.org.