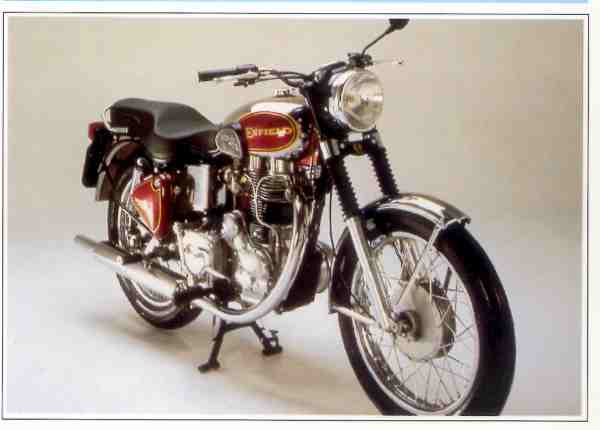 The British Enfield armaments company had begun the production of motorcycles in 1907, under the marque name of Royal Enfield; it launched the Bullet in 1951. In its 1955 version, the Bullet went into production in Madras, in southern India.

Too Dear for the Indians

Even though the Royal Enfield factory in England closed down in 1967, the Madras factory continues to build the Bullet, as the flagship of a range of an industry which is still relatively lively but generally oriented towards even more basic machines. In India, the Bullet is built for various state departments rather than private owners. Twenty thousand machines are assembled each year, and the factory employs some two thousand workers: this 500 (painted maroon, not black like the 350) is intended for European markets.

The decline in Eastern markets, the opportunities offered by low tariffs and the nostalgia boom, plus the demand for ''basic'' motorcycles have led recently to the export of these exotic machines to Europe. Compared with the original Bullet, the principal differences concern the carburetion (a Japanese Mikuni replaces the British Amal) and the ignition, nowadays by coil and battery and not by magneto.

The only English 350 of the Fifties still available new is the Bullet built by Enfield of Madras! Now popular all over Europe they are named again Royal Enfield