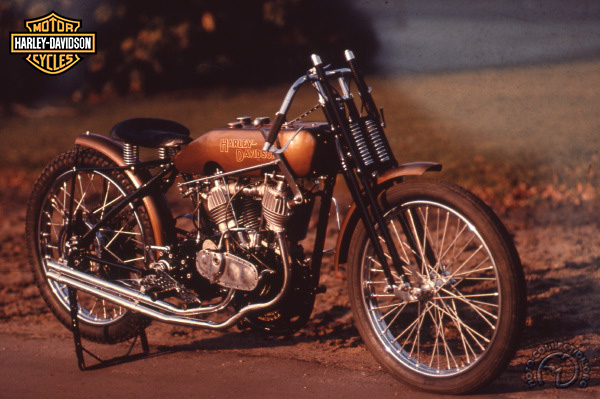 First past the ton

In the 1990s, when four valves per cylinder are the rule, it seems strange that in the years after WWI, Harley-Davidson abandoned its highly-sophisticated eight-valve racing V-twin in favor of an F-head unit with overhead intake and side exhaust valves in a chamber to one side of the combustion chamber.

During 1921, the works riders used both types of engine. Ralph Hepburn rode an eight-valve machine to victory in the Dodge City 300, a race held on a cinder-covered horse-racing track, at a new record average of 86 mph, with a fastest lap of 103.5 mph.

However, the most famous victory was won by Otto Walker on one of the new machines at Fresno, California. On a banked one-mile board-track, he won the main race at an average of over 100 mph, the first time in the world that a motorcycle had won a race at over the "ton". Proving that the speed of the new Harley-Davidson was not just a US legend, the British rider D.H. Davidson (no relation to the founders of the marque) became the first man to lap the famous Brooklands banked oval track at over 100 mph. Like Otto Walker, Davidson used a 997cc Harley-Davidson "pocket valve" to set this record average of 100.76 mph, in April 1921.

The "pocket valve" Harley-Davidson was the first motorbike in the world to win a race at a speed in excess of 100 mph.