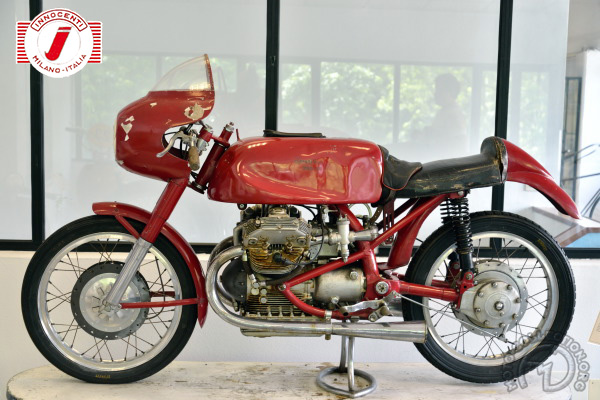 Drunk with the success of its scooters, but wanting to free itself from their everyday image, the Lambretta company decided in 1952 to compete in a Grand Prix with a machine which was at least original. Its designer was the engineer Pier-Luigi Torre, the same man who had conceived the marque's famous scooters.

The 250 Lambretta was certainly technically original. The transverse mounting of its V-twin engine broke new ground, while its shaft drive was also astonishing on a racing machine. The rear suspension was by torsion bars mounted below the axis of the fork.

Nello Pagani and Romolo Ferri were put in charge of preparing the machine, which only raced once, on the Locarno circuit in August 1952. The outcome was at least encouraging. The machine proved very powerful, but this one and only race ended in a Did Not Finish while Ferri was placing second to Anderson's Guzzi. The 250 never again appeared in a race. After that, Lambretta was too busy, both industrially and commercially, fending off the threat to its bikes from the Piaggio Vespa, and the effort needed to develop the 250 seriously would have been roo big a distraction. Two examples of this exceptional machine were built, one of which survives today, modified in 1953 to take a twin-cam head, and with its torsion bars replaced by conventional rear suspension.

The result of Lamhretta's one attempt to break out of the straitjacket of scooter construction Â–resulted in an inconclusive withdrawal.