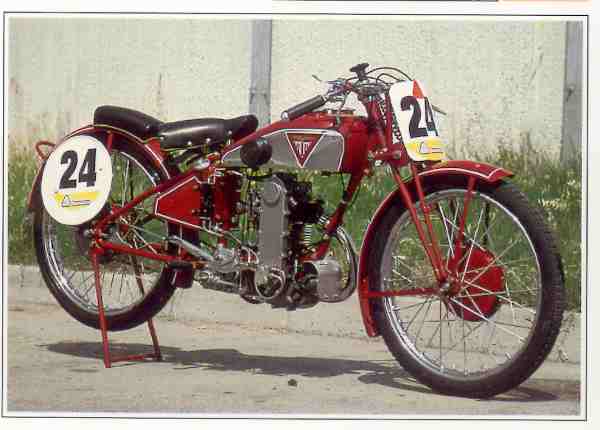 For a long time, the 175 category was one of the most fiercely contested. This competition produced - particularly in Italy - a number of superb little four-strokes. MM made its debut in this category in 1929, but the overhead-valve engine they were using at the time was already outclassed. For 1931, MM decided to bite the bullet and developed an overhead-camshaft unit, which did not really come into its own until the following season.

For the ohc MM, the glory years really began in 1933, when Bonazzi took the World Flying Kilometer record at 100.38 mph, despite determined opposition from the German Winkler on a DKW. The same year, the great Dorino Serafini became Italian champion, while the French MM rider Barthe won the Grand Prix of France at Montlhery, a feat

repeated on the same circuit in 1935 by the Frenchman Terigi and in 1937 by the English rider Dickwell. And Schouppe became Champion of Belgium in 1936 with his 175 MM.

Remarkably, a similar 175 MM, ridden by Fouilhoux, finished second in its category in

the Bol d'Or in 1948, long after the MM's racing days were over in its homeland. In 1935, the Italian Federation had done away with the 175 category, ending a whole generation of machines that were at the same time simple yet highly evolved and aggressive. Among the finest of them all - marques such as Benelli, Ladetto-Blatto, Miller and OMB - was the MM.

With a fine competition record, the MM 175 is a typical Italian sporty lightweight of the early 1930s.