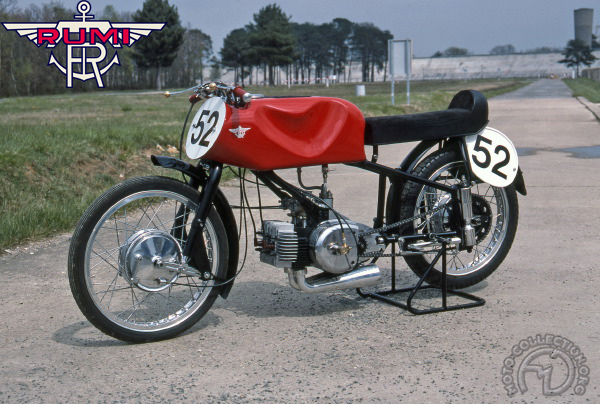 Founded as an offshoot of a textile manufacturing company, the Rumi factory began production in 1950. Remembered for its rapid "Formichino" scooter of 1954, Rumi also made highly desirable "Competizione" machines powered by a distinctive 125cc horizontal twin two-stroke.

The first Rumis had flywheel magnetos, but this proved inefficient at high revolutions. The company's first over-the-counter racers had chain-driven magnetos that allowed the engine to exceed 10,000 rpm. A bulbous casting protected the chain and magneto, earning the machine the unflattering nickname "Gobbetto" ("little hunchback"). Of the 60 Gobbettos built, perhaps ten survive. They have become so highly sought after by collectors that Italian buffs have been known to travel as far as Argentina on their trail!

This aggressive little machine carried not an ounce of surplus weight. Its two stubby megaphone exhausts emitted an earshattering noise. Works racers won the 1954 Italian National Championship and from then on, Rumi competition bikes carried decals with the Italian and checkered flags behind the firm's flying-anchor motif. A four-stroke model, the "Bialbero Competizione," had chain-driven twin overhead-camshafts. The final 1954 version of the Gobbetto, with swing arm rear suspension, was superseded in 1955 by the desirable "Junior Gentleman," with a new design of frame and telescopic front forks.

The dramatic lines of the Rumi Gobbetto are emphasized by the indentations in the sides of the fuel tank to hold the -rider's arms.