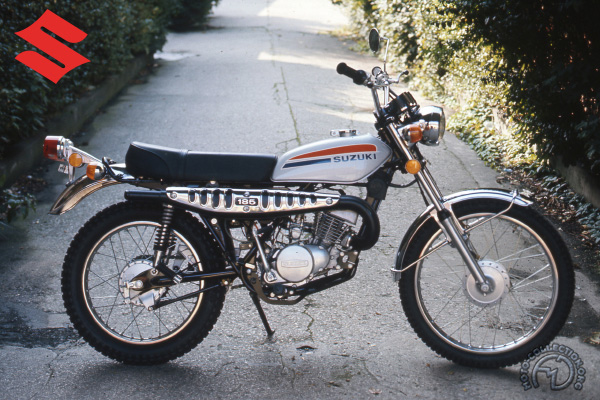 Yamaha started the fashion for trail bikes in Europe with its AT1 in 1969. The remaining members of the Japanese "Big four" quickly hopped on the bandwagon, which for many years were the bulk of their sales.

Suzuki's first truly competitive lightweight trail bike, the TS 125, was launched in 1971. It followed the hybrid TC 120 with its dualratio final drive: 3-speed (later 4) x 2. This time, Suzuki made no mistake and followed the example of its TS 250, which was copied from its famous motocross models. That same year, the TS 125 was joined by a 185cc derivative designed especially for the US, where it became a best-seller.

Flexible and easily bandied, the TS185 was one of the best hghtweigbt trail bikes of its day.