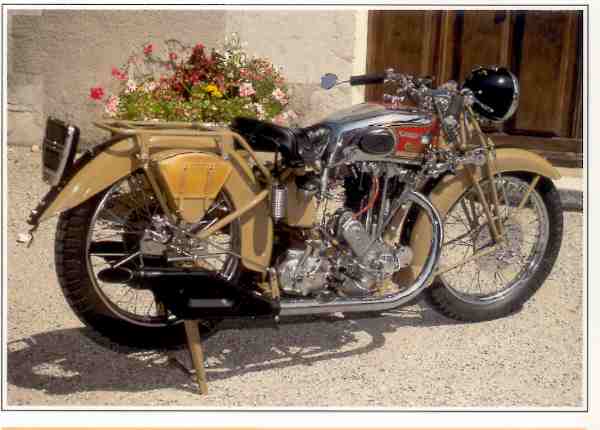 Motosacoche may have been one of the best-known Swiss marques, but the bike shown here was built in France. In 1922 the Swiss company established a factory in Lyon, cradle of the French motorcycle industry. The first French Motosacoche was the Type 2CR, an F-head 600cc V-Twin, which sold for less than the 500 single built in Geneva! And when President Poincaré devalued the French franc by 80 percent in 1928, the Swiss product became even more unaffordable. In order to hang on to its share of the French market, the Swiss marque stepped up production at the Lyon factory.

From Geneva to Lyon

Only the twin-port MAG engine of the Type 312 Motosacoche was imported from Switzerland; the rest of the machine was built in the Lyon factory or supplied by French accessory manufacturers, like the Magneto-France ignition, the Amac carburetor, and the Marchal headlamp.

This French Motosacoche also differs from the Swiss version in the design of its fuel tank and its Burman gearbox, used instead of Hurth or Sturmey-Archer transmissions. In any case, the 350 was less popular in Switzerland, where they preferred the 500 to cope with the mountain passes. Now looking as good as new, this Motosacoche was requisitioned by the FFI Â– the resistance fighters of the Maquis Â– during the war. Discovered in a state of advanced dereliction, many years later, it was then restored.

Though it was built in Lyon, this Motosacoche is painted in the colors of the city of Geneva Â– khaki and garnet red.