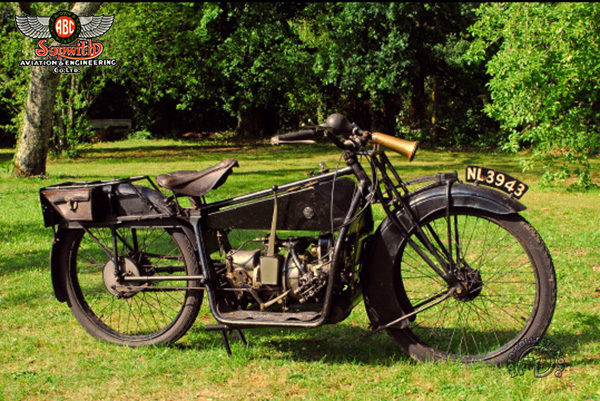 Ahead of its time

The revolutionary ABC of Granville Bradshaw succeeded another flat-twin -but with the engine lengthwise in the frame-in 1919. An amazing array of innovations, the ABC, built by Sopwith Aviation, originated the transverse flat-twin engine later copied by BMW).

It had a four-speed gearbox bolted to the back of the engine, aluminium pistons, one-piece machined-steel cylinders, overhead-valves, internal-expanding drum brakes and even optional electric lighting.

Reputedly designed in under three weeks, the ABC caused a sensation at the 1919 Motorcycle Show. The engine could reach 6000 rpm, and Jack Emerson revealed its capabilities in 1920 at Brooklands by taking the hour record at 70.44 mph. When T.O.M. Sopwith unveiled the ABC, he said that production would be 5000 to 10,000 a year at a price of $315. Orders flooded in, but the changeover from aircraft to motorcycles caused delays. By the time bikes were ready for sale, the price had jumped to $675 and orders were canceled. There were teething troubles -early ABCs tended to shed their pushrods-and approximately 3200 ABCs had been built when production ended in 1921. The design was bought by another aviation firm, Bristol, which was negotiating a production license for an airplane engine with the French Gnome & Rhone company and threw in the ABC as a bonus. Redesigned and available in 3.5 or 5 hp form with four-speed transmission and mechanical oil pump, the ABC-Gnome & Rhone remained in production until 1925.

Total production of the revolutionary ABC is reckoned at about 3200 units, plus a further 1500 French-built ABC-Gnome & Rhone machines.