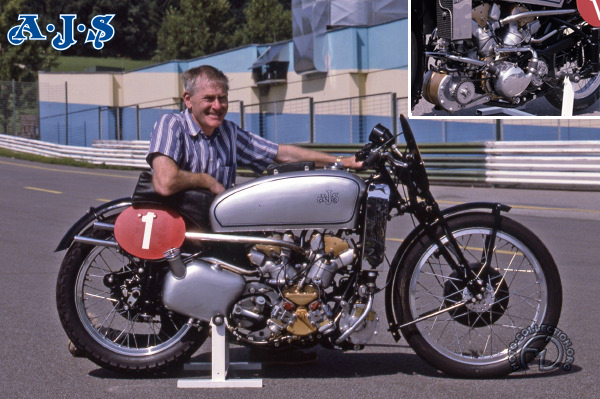 The Thirties saw the age-old dream of multi-cylinder-engined motorbikes moving within the engineers' grasp. Most makers hurled themselves headlong into building the most complex machines ever seen, and the day of the single-cylinder seemed definitely gone.

A]S exhibited a prototype touring bike with an air-cooled V4 power unit at the 1935 London Show, but it was never built in this form, though a racing version appeared in 1936. It was replaced in 1938 by a new supercharged version with the blower mounted at the front of the engine. The bike was extremely fast -but it overheated horribly. AJS designer Matt Wright went back to work and completely revised his project in 1939, redesigning the cycle parts and adopting liquid cooling.

At last the revolutionary double-overhead-cam V4 was competitive-but the march of time prevented it from showing its full potential. The two V4s entered in the Isle of Man Tourist Trophy at the beginning of June finished eleventh and thirteenth after several stops for oil and water. Then the V4 was entered in the Ulster Grand Prix. It was the heaviest bike in the race, but set a staggeringly fast lap record -the first 100mph lap of the Clady circuit-before its front fork broke! The AJS V4 only reappeared a few times in 1946 before it was finally put out to pasture in a museum.

The V4 A}S was an attempt to rival the powerful continental bikes that dominated European Grand Prix racing, but it was not competitive.