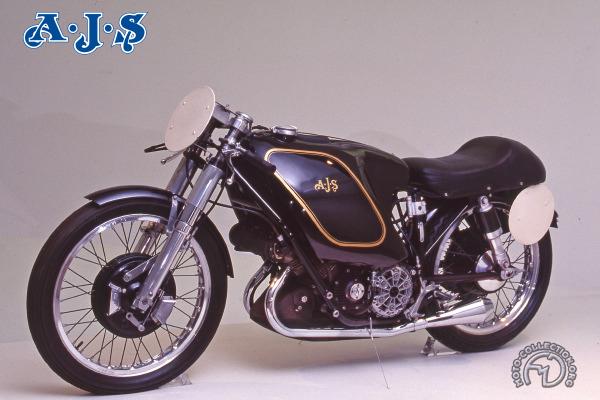 Five years after the E90 "PorcupineÂ” with its horizontal cylinders, A.JS launched the E95 in 1952. This evolutionary model had its cylinders inclined at 45 degrees, permitting a cylinders inclined at 45 degrees, permitting a shorter wheelbase, but it scarcely merited being called "Porcupine" anymore, for instead of the studs on the cylinder head which had inspired the nickname, it had conventional cooling fins.

The engine was carried in a double-cradle frame interrupted beneath the engine, and the machine appeared in the Tourist Trophy Races, as did the three-valve single-cylinder 350cc 7R3. The following year, the E95 appeared with two separate cylinder heads instead of one common to both cylinders. The angle of the inlet points was reduced from 43 to 25 degrees to the perpendicular and the frame was also modified, gaining two side cradles supporting the engine.

The End of Works Entries

The final, 1954, Mk 2 version was merely cleaned up aerodynamically, though it was not given a fairing. The front fork and steering head were shortened and the fuel tank was carried down over the flanks of the engine, so that a mechanical gas pump could be fitted, driven from the magneto shaft. As their business worsened, the Associated Motor Cycles group decided that there would be no entries in 1955: it was the end of the road for the E95 and 7R3.

Low and compact, the ultimate version of the E95 was typical of the aerodynamic theories of the Fifties. It was raced in the Sixties by Mike Duff and tuned by Tom Aster.