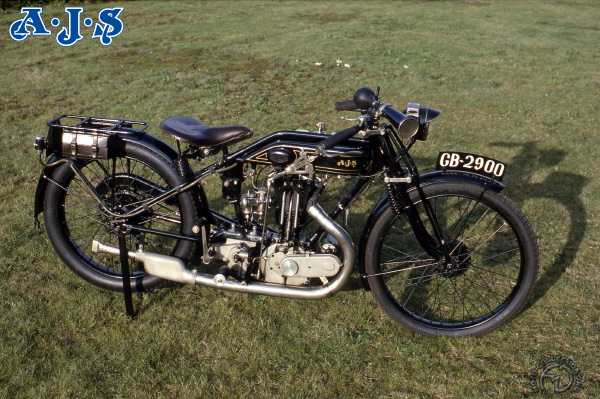 The legend of the AJS Big Port began with the 1921 Tourist Trophy. The youthful competition manager of AJS, Howard R. Davis, entered the same 350cc power unit (in different cycle parts) for both the Junior and the Senior events, since AJS didn't make a 500. A puncture robbed him of the Junior victory (his teammate Eric Williams won) but Davis was victorious in the Senior, beating the 500 Indians of Dixon and Le Vack.

Success followed instantly. For 1922, the diameter of the big-bore exhaust was further enlarged to 2 inches and when the racer spawned a sports version in 1923, the cumbersomely titled TT B3 OHV was nicknamed "Big Port." The TT designation was retained until1926, when it was dropped after a disastrous race week for AJS.

In any case, the 1925 and 1926 Ajays weren't real Big Ports. The exhaust diameter was cut to a skimpy 1 7/16 inches, though it returned to its former glory in 1927 and 1928. The Big Port had astounding performance, exceeding 80 mph. It was incredibly light and simple, yet remarkably reliable. Two bolts and a bridge piece retained the cylinder head, which could be dismantled for routine maintenance within five minutes. But this functional flat-tanker was dropped after 1928 in favor of a saddle-tank machine, which weighed 50 lb more. The magic had gone, and in 1931, AJS was taken over by Matchless. The new owners launched a Big Port in 1932, but it failed to fool the faithful.

A genuine racing machine, this "Ajay" is fitted with road-going equipment, acetylene lighting, bulb horn and a "Brooklands CanÂ” muffler.