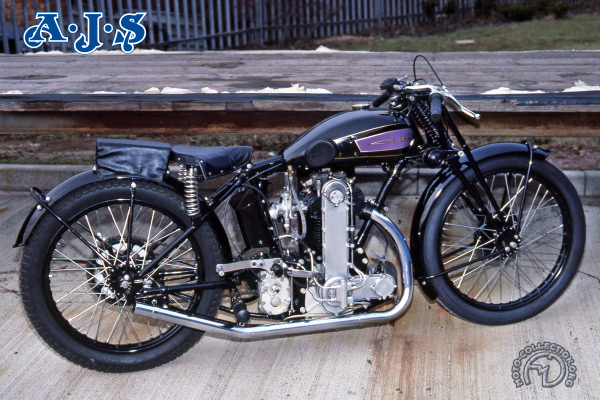 Ancestor of the legendary R7

AJS - which took its name from the initials of its founder, Albert John Stevens -began by making engines and progressed to complete bikes in 1909, three years ahead of Sunbeam, the other famous sports make.

The first racing success for AJS came with a first-place victory in the 1914 Junior TT, the first race in which a checkered flag was used to mark the finish. The only real difference between the TT racers and the production 350 was a supplementary oil reservoir on top of the fuel tank and a supplementary dual-ratio gearbox offering a total of four speeds.

After WWI, AJS enjoyed remarkable racing success with the ohv 350 "Big Port," which won the Junior TT in 1921 to 1923 and the 1921 Senior, unique in TT history. The first real Grand Prix 350 and 500cc machines from AJS appeared in 1927, with a chain-driven overhead-camshaft. From the Big Port, they took their appearance, the three-speed gearbox, the dry-sump lubrication and the forward-mounted magneto. In 1928, AJS catalogued two overhead-cam models, the 500cc K10 and 350cc K7. The following year, with a saddle tank and Webb girder forks, the designation was changed to R10 and R7. An R7 placed third in the 1927 Junior TT, but victory followed in the Austrian, Belgian, European and Swiss Grand Prix. The 1928 season was less brilliant, but a new fork introduced in 1929 brought the R7 victory in Ulster and Holland, while the R10 set a new world hour record of 108.6 mph in 1930.

Leo Davenport won the Ulster Grand Prix at an average of 76 mph on his 350cc R7. With the same bike, be placed tenth in the 1930 junior TT.