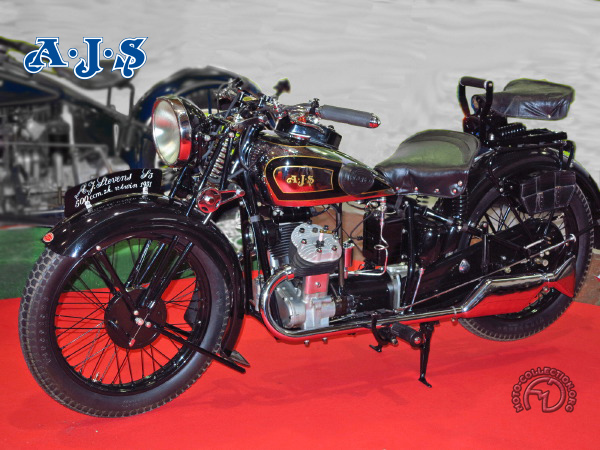 A]S was in bad shape in 1931, when it launched this revolutionary 500, for the company was too highly diversified (automobiles, radio sets, sidecar chassis) and insufficiently financed.

The Stevens brothers staked everything on the launch of a motorcycle that was out of the norm, and the marque lacked the means to promote this model in the manner that it deserved. More than 35 years ahead of the Guzzi V7 (which would eventually popularize this engine configuration), and three years after the disastrous P&M Panthette, AJS chose the transverse V-twin for its compactness, its ideal cooling, its excellent weight distribution and its extremely low center of gravity.

Even though this configuration was ideally suited to a unit-constructed gearbox and shaft final drive, AJS chose to fit a separate box driven by shaft and with a transfer gear, allowing final drive by an enclosed chain. The included angle between the cylinders was 50 degrees, the cylinder heads were cast from aluminum and the camshafts operating the side-valves were driven by automatically-tensioned chains. More curious still was the location of the clutch on the output shaft of the gearbox and the fitting of the total-loss lubrication system with a return pipe to an under-saddle tank to justify the use of the term "dry-sump lubricationÂ”. AJS passed into the ownership of Matchless during 1931, and the firm's new owners, already preoccupied with launching their Silver Arrow twin, discontinued production of the S3, despite its competitive pricing level.

The engine of the A]S 53 was compact, but the bike lacked the financing to succeed.