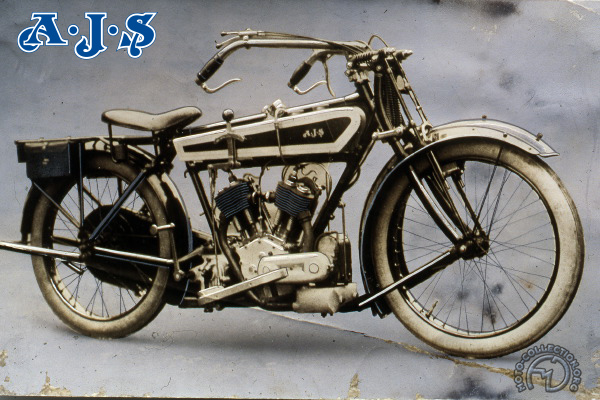 First of a long line

In 1911, the Stevens Motor Manufacturing Company, founded at the turn of the century by the four Stevens brothers - who had been supplying V-twin engines to Clyno since 1909 - decided to produce its own bikes under the marque name AJS (for A.]. "Jack" Stevens, the dominant brother). Lightweights came first, followed by the 698cc Model D V-twin, which debuted at the 1912 London Show. It was the start of a long line that culminated in the 1000cc twin of the late 1930s.

The Model D was a very advanced motorcycle for its day, with primary and final drive by chain and a three-speed gearbox. The first versions had detachable heads, but there were complaints about leaking cylinder joints, so fixed heads were adopted in 1913.

In 1915, the displacement was increased to 748cc and the external appearance changed, with the adoption of a vertical frame tube behind the engine and an elegant gas tank enameled silver-gray and black. Detachable cylinder heads reappeared in 1916, but production of these models ended early that same year, as the big AJS was not chosen for the British Army, and the firm had to manufacture munitions. The big-twin did not reappear until the 1919 London Show. However, the British Army did use a number of AJS V-twin power units in its 744cc Clyno machine-gun outfits during WWI. In 1910, Clyno had moved into the former Stevens Screws factory in Wolverhampton, where the father of their engine suppliers had traded as a precision engineer.

Very modem for its day, the first A]S V-twin bad its career brutally interrupted by WW7, though it reappeared stronger than ever in 1919.