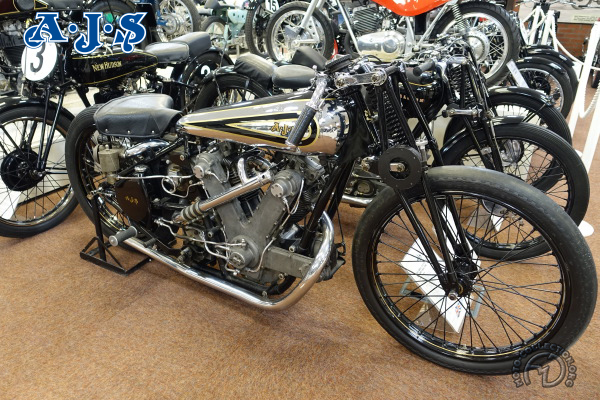 Inspired by the world records - including a flying kilometer covered at 119 mph - set by a specially-prepared 500 single ridden by Bert Denly at Arpajon in August 1929, AJS decided to attack the absolute motorcycle speed record in 1930. Project leader was Jack Stevens, eldest of the five brothers who had founded the company, with Nigel Spring as team manager and Oliver Baldwin as rider - Bert Denly being judged too small for a 1000cc bike!

The engine used two cylinders and heads built for the 500cc record-breaker. Each had a chain-driven ohc mounted on a special bottom-end.

Baldwin reached 132 mph at Arpajon on the naturally-aspirated 1930 version of this bike (70 hp and a compression ratio of 11.5:1), but Joe Wright beat this record on his OEC-JAP with 137 mph. AJS fitted a supercharger, but (since the marque went into liquidation) the project was shelved for over two years, until Matchless bought AJS. By the time the reorganization was complete, Ernst Henne's BMW had raised the record to 152 mph. Even so, AJS signed Wright for a new record attempt on Southport Sands. But the official chronometers of the FIM, which had been sent from Germany, were held up by British Customs and the best time that was achieved was only 135 mph. Then bad weather and a broken valve halted the record session. In late 1933, the AJS made a further attempt at Tat (Hungary), reaching 145 mph, and was then sold at a low cost to Charles Mortimer, father of modem Yamaha rider Chas Mortimer.

Valves: chain-driven overhead-camshaft to each cylinder

Discovered in Tasmania and brought home to England, the supercharged A]S 1000cc V-twin has been restored to its original condition.