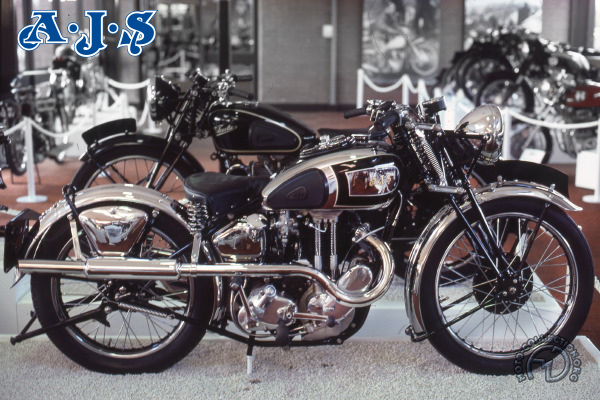 All in the family

The AJS range displayed at the 1938 London Motorcycle Show, held at Earls Court for the first time, comprised no fewer than 16 different models, from a 250 single to a 990cc V-twin. But the main attraction on the AJS stand was the new Silver Streak sports single.

Matchless had acquired AJS in 1931 to create Associated Motor Cycles and had long used the model prefix "Silver" (as on the narrow-angle 400cc V-twin Silver Arrow and the 600cc V4 Silver Hawk). Now the designation was being applied to an AJS single.

This was the last engine designed by Bert Collier, son of H. H. Collier, who founded Matchless in 1899. His other sons, Harry and Charlie, had many racing successes with Matchless machines before WWI. Bert had also been a very successful racer, but after completing his studies, became chief designer for the company between WW1 and WWli. The new engine was available in three capacities -250, 350 and 500cc -and was also used in three bread-and-butter models as well as the three sporty Silver Streaks. The latter models had specially-prepared engines, with a "hot" cylinder head, polished ports, a special exhaust system and a strengthened frame with good ground clearance, a sump shield and a beefed-up Burman box with a special bottom gear, plus lots of chrome to justify the name Silver Streak.

In keeping with its name, the 1938 A]S Silver Streak was superbly finished with plenty of chrome and polished aluminum.