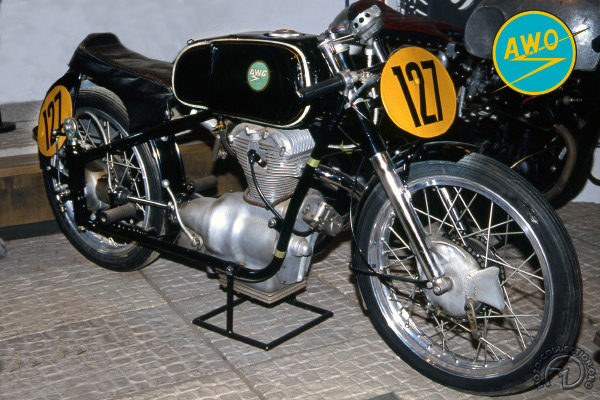 One of the lesser consequences of the partition of Germany in 1949 was the creation of a motorcycle industry peculiar to East Germany, though its products always retained a family resemblance to those of West Germany.

The AWO 425 of 1955, built by the VEB Simson works of Suhl where Simson-Supra cars were constructed in the 1920s, strongly resembled the BMW R25 (13 hp at 5800 rpm and 74 mph). The resemblance stopped with the starting method: conventional kick-starter on the AWO, transverse kick-starter on the BMW. The AWO also cost 25 percent less than the BMW R25/3, while many other details betrayed its Eastern Bloc origins, like the BVF (Berliner Vergaser Fabrik) slide-throttle carburetor, the Isolator spark plug, the IKA dynamo and the excessively grippy Riesa tires.

And a Real AWO

The A WO raced at both Hockenheim and the NĂĽrburgring, but it was neither particularly fast nor particularly powerful, so it had little chance of success against the rival NSU Rennsport, DKW or Adler machines. The BMW's Eastern Bloc doppelganger racing engines were derived from a midly tuned 425 "sport" version developing 14 hp at 6300 rpm against 12 hp for the standard 425. Launched in 1957, this new 425S was markedly more modern with an improved cylinder head and Â— specially Â— swing arm rear suspension and 18 inch wheels; the BMW style had gone for good.

This AWO has been stripped for competition use, and the capable cover in front of the engine that normally shielded the magneto and dynamo has been removed.