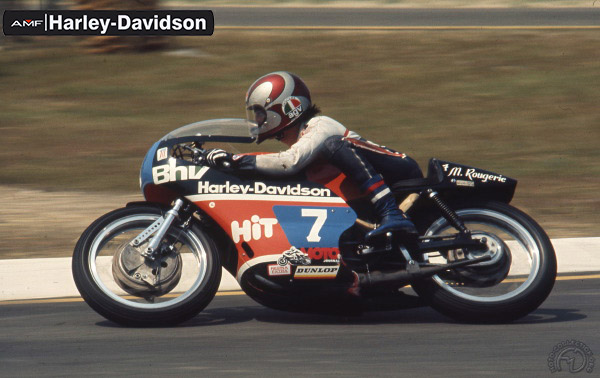 Michel Rougerie first made headlines in 1969 when he won the 24-hour Bol d'Or race on a Honda 750 and became the idol of the French motorcycle sport buffs. His style of riding, with his chest glued to the tank and his nose buried in the head fairing, was unique. After twice becoming champion of France, in 1972 Rougerie appeared in Grand Prix with the new Aermacchi-Harley-Davidson. He narrowly missed winning the 1975 title. Rougerie left Harley in 1977, and was killed in 1981 at the Yugoslav GP.

The first air-cooled Aermacchi 250 twin two-stroke appeared in 1971, followed a year later by a 350. In 1977 the marque adopted water cooling Â– and the name of Harley-Davidson, which had just bought the Varese firm. The 250 and 350 Â– and the subsequent 500 Â– were almost identical externally. They were extraordinarily successful. The 250 was world champion in 1974-75-76, while the 350 won the world title in 1976; in every case the rider was Walter Villa.

These machines were water-cooled two-stroke twins with separately cast cylinders. The gearbox was bolted to the engine for easy disassembly. The power train and frame were the subject of constant development; the 500 had quadruple carburetors, a rear brake disk on the transmission and magnesium Campagnolo wheels with a cast-in disk brake.

Michel Rougerie (inset) and the machine on which he placed third in the 1974 Italian Grand Prix, having led for much of the race.