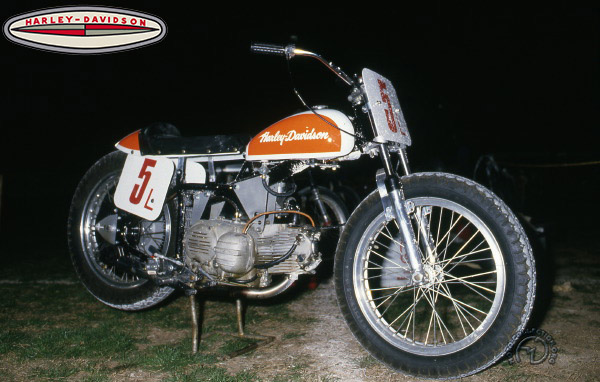 In the early 1960s, Harley-Davidson determined that it wanted to attack the lightweight motorcycle market in the United States. Harley had finally defeated Indian on the Big Twin front when Indian closed down its Chief assembly lines in 1958. Now, the Milwaukee Marvel turned to counter the next attack on its flank, the lightweight market that was ruled by the British and Italian makers': Triumph's 250cc Cub, Ducati's Diana, and Parilla's Grand Sport and Tourist

The Motor Company chose the quick entry route into the market It bought an interest in the Italian firm, Aermacchi of Varese. In 1961, Harley-Davidson began importing Aermacchi's hot horizontal four-stroke singles as the 250cc Harley-Davidson Sprint model. With some 26-28 hp available in the lightweight chassis, the Sprint was a real road burner, often beating the best of Harley's Big twins on the street and the racetrack.

To back up its team of dirt-track racing stars, the Harley race shop quickly took to the Sprint as well. While the current WR 750cc racer could sweep the competition on the long-distance dirt tracks, Harley riders needed a light, quick, and nimble cycle for the short tracks. The Sprint proved the ideal weapon, and Harley-Davidson soon offered the CR and CRS dirt-track racer and scrambler models as well as the road-race CRTT. The new team of Harley Sprints immediately proved its mettle -as well as its Italian metal.

The range of Aermacchi-Harley-Davidson Sprints continue to be popular and competitive vintage racers, such as this CR dirt-tracker.