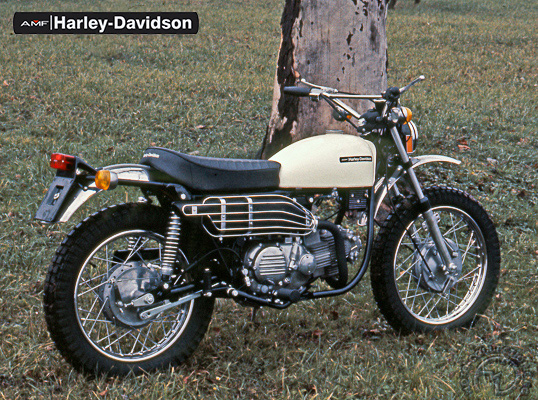 During the 1960s, the distinctive Aermacchi horizontal singles established a formidable reputation as sport machines with a long record of success. Between 1960 and 1972, the motorcycle division of the Italian firm, long famous as a maker of planes, progressively passed into 100 percent ownership by Harley-Davidson, which itself had become part of the AMF group (makers of bowling and sports equipment) in 1969.

Under American control, the marque thought only of its US market and its new 350cc models had little in common with the old Ala Verde and Ala d'Oro Aermacchis, though the engine seemed to have hardly changed. It had gained an extra 100cc and dual exhausts (from a single port), plus a dry-plate clutch. That year a backbone frame that only weighed 40 lb was used, but it gave way during 1972 to a classic double-cradle layout scaling 50 lb.

From a lively sports bike, the Aermacchi single was transformed into a docile tourer, happiest at 70 mph and 4000 rpm. Its principal advantage was its excellent bottom- end torque, reminiscem of the illustrious Moto Guzzi 500 Falcone. With its wide cowhorn handlebars and comfortable saddle, the 350 Aermacchi-Harley-Davidson had the same lazy riding style as its big sisters from Milwaukee, though it lacked their image. That major fault brought the 17-year career of the single from Varese to a grinding halt.

Economical (60 miles to the gallon) and reliable, the 350 Sprint was a good touring bike, one of the last generation of European ohv four-strokes.