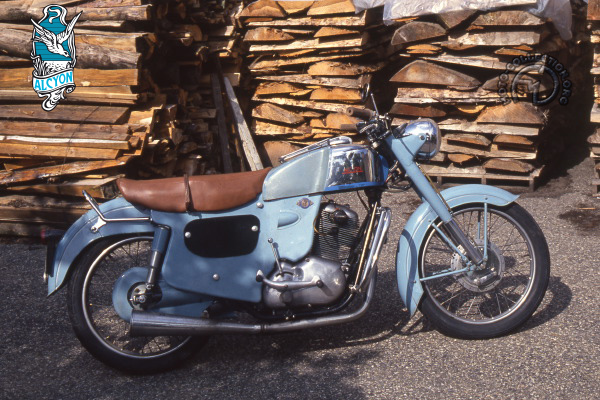 Revival of the French 250

At the 1952 Paris Show, while the French industry was dominated by 50cc cyclemotors, 125cc runabouts and lightweights of 175-200cc, there was, nevertheless, something of a renaissance of the 250cc class. Terrot had its OSSD, Rene Gillet its ASl, Radior its Bison, and Monet-Goyon its hybrid 232cc M2VS. Chartoire, which made AMC engines (earlier limited to 175cc) at Clermont-Ferrand, also launched into the quarter-liter market.

The new AMC engine aroused the interest of several marques that saw it as a low-cost way of creating a machine for a limited clientele who would otherwise buy British or German machines. The engine was certainly well built - it weighed 110 lb, while a two-stroke Ultima 200cc was only half as heavy - and it was a good-looking design.

Alcyon was one of the makers to adopt the AMC engine, and prototypes were tested using frames with plunger rear suspension. The production version of this Model 39 was unveiled at the Spring 1953 Lyon Fair, by which time swing arm rear suspension had been adopted. The chain was fully-enclosed and rider and passenger were protected by substantial side fairings. At the October 1954 Paris Show, Alcyon revealed a 232cc two-stroke with pressed-steel front fork, leading link front forks and wraparound fenders. The AMC-engined 250 also adopted this frame, becoming the "B2," available with two-tone paint. In 1958, Alcyon merged with the northern French Lucer firm and from then on made nothing but cyclemotors.

The 250 AMC engine may have been a bit lacking in power and refinement, but - apart from Alcyon - it was used by makers like Automoto, DS Malterre, Gima, Guiller and Syphax.