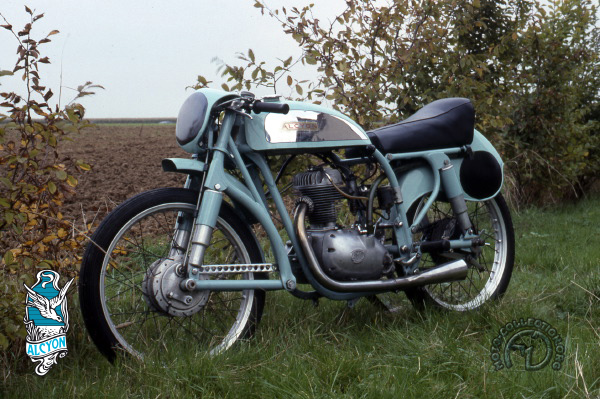 It had been a long time since the kingfisher blue of the Alcyon ("kingfisher" in French) factory appeared on the race circuits, but the company was back on the track with some very special designs for the 1954 season.

These had thoroughly modern cycle parts, with an Earles front fork and a frame inspired by the McCandless brothers' "Featherbed" design, a double cradle layout with robust steering head mounting; swing arm rear suspension was fitted. The Hat-bottomed tank sat on the upper frame tubes, and had lateral swellings that acted as elbow-rests for the rider. The wheels had light-alloy rims and the front one was braked by a double drum.

Powered by a heavily revised AMC overhead-valve 175cc "Bol d'Or" engine with shortened crankshaft and flywheel magneto with external coils, one of these machines took part in the Cote Lapize hillclimb in 1954. Two weeks later, in the "Two Hours of Montlhery" (the eliminating trials for the Bol d'Or), two of the works Alcyons were fitted with twin-cam 175 AMC engines developed by the rider/tuners Camus and Mathieu. They didn't last long: The pistons melted. Two other Alcyons, powered by overhead-valve AMC engines, finished eleventh and seventeenth. It seems as if AMC was concerned with preparing its road-going 250cc engine, which in the 1954 Bol d'Or was fitted in the Alcyon of L. Rouger/Robin and the "Featherbed" machine ridden by J. Rouger/Santucci. Only the standard machine completed the race, seventeenth out of twenty-nine.

A tuned series-production engine, even in a well-conceived racing frame, does not necessarily make a successful competition bike - and the Alcyon Bol d'Or was far from successful.