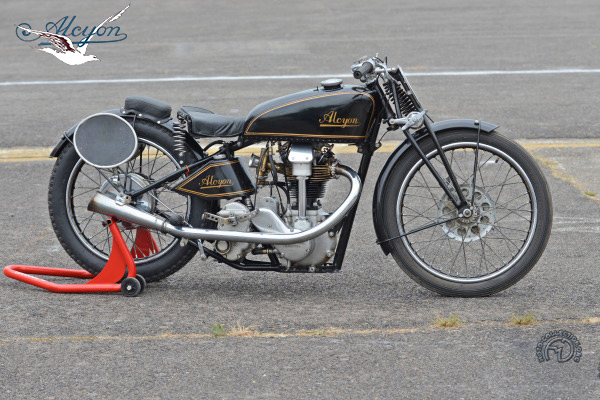 Though French motorcycle racing buffs are familiar with the achievements of marques like Terrot, Koehler-Escoffier or Jonghi, the name of Alcyon deserves wider recognition, for this stunning overhead-camshaft 350 that was Champion of France in 1935.

Alcyon won many races with its 350 and 500 overhead-valve twins just after WWI, and made a comeback in 1930 and 1931 with an overhead-valve 350. After 1931, the opposition from Jonghi and Monet-Goyon became so strong that the marque disappeared for three years. Alcyon returned to racing at the French championship meeting at Montlhery in 1934, with a overhead-cam single. The power unit bore the name of Alcyon's engine building subsidiary, ZĂĽrcher.

The Alcyons exceeded 90 mph during testing. In a race, one bike's gearbox was smashed, but another, ridden by the Gaussorgues, finished third by just over two minutes. In 1935, the Championship of France hinged on three races. In the GP of the French Motorcycle Union at Montlhery, Marcel Balsa rode a modernized machine, with large brakes, bigger oil tanks and a reinforced gearbox, and finished fourth, trailing a works Husqvarna, Roger Loyer's Velocette and the works F . On the Dieppe circuit, the Alcyon ridden by Willing finished fourth behind three Velocettes. Finally, on the Cloth of Gold circuit at Calais, Willing led Terrot works rider Braccini home by nine minutes to secure France's most coveted national title.

Beautiful and effective, the Alcyon GP 350 deserves wider recognition for its performance.