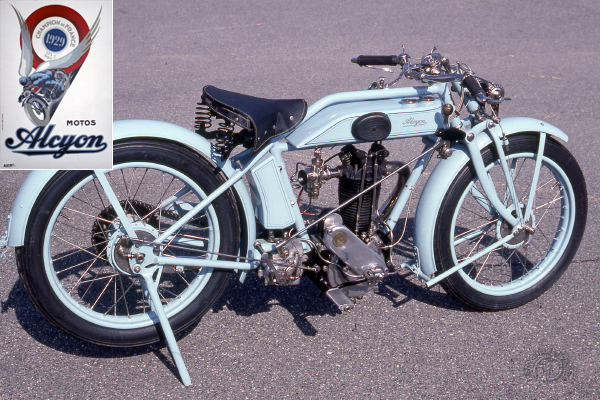 Influenced by the Bud1et engines that it had fitted since 1904, Alcyon was among the first motorcycle makers to opt for overhead-valves, initially in racing - with four valves in 1912 - then on its catalogue models in 1927.

The origins of the Alcyon marque are obscure. All that is known is that the firm, based in Courbevoie (Paris), was owned by the Gentil family and began, like many other companies, by making bicycles. But the actual connection between ZĂĽrcher of Courbevoie and the ancient firm of ZĂĽrcher & Luthi (ZL) from Saint-Aubin (Switzerland) - and later known as Zedel with a branch company at Pontarlier Â– is unknown.

It's likely, however, that ZĂĽrcher of Courbevoie was the fruit of the acquisition of Zedel-Pontarlier by the Gentil family in 1923. It's definite that, in 1924, Alcyon began exclusively fitting ZĂĽrcher engines, first two-strokes and then, in 1927, three four-stroke units of 175, 250 and 350cc. All these ZĂĽrchers were single-cam pushrod engines with external flywheels, single exhaust pipes and hemispherical cylinder heads. Alongside these engines there was also a two-cam pushrod ZĂĽrcher 350 with internal flywheels. This was fitted, with a forward-mounted magneto by Thomann and Labor (two marques belonging to the Gentil group), but not a single Alcyon catalogue depicts a machine so equipped. It nevertheless existed, and at least two twin-cam ZĂĽrcher-powered Alcyons survived, though with rear-mounted magnetos.

Not featured in the Alcyon catalogue, this ZĂĽrcher-powered Alcyon with internal flywheels is an exceptionally rare and elegant machine.