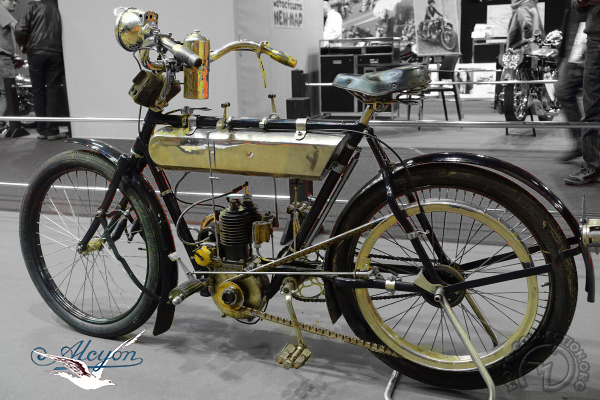 A motorcycle manufacturer since 1904, Alcyon of Courbevoie quickly achieved fame by winning the "Criterium du Tiers de Litre" in 1905 - a race for machines of 333cc or less.

The marque's principal rider was the Italian Alessandro Anzani, an engineering genius who later found fame building aero-engines-one of which powered the first airplane to fly across the English Channel. He was also famed for the awesome profanity of his language!

From the Wild to the Tame

But while Alcyon's reputation was created by the marque's sports exploits, the company quickly realized that there was a considerable market for a tamer kind of two-wheeler. In 1906, in response to the demand from customers who found their motorcycles too fast and heavy, Alcyon launched its first "Light Motorcycle," a 250 powered by a coil-ignition 2 hp Zedel engine. It weighed less than 80 lb and cost just $130. Its success sparked the production of an even smaller and cheaper motorcycle, the $122 "Gasoline Bicycle," still Zedel-powered, with an automatic intake valve and coil ignition, but only of 200cc. But Alcyon had aimed too low - its customers found its 18 mph top speed not fast enough. As a compromise, in 1909 Alcyon launched a new "Light Motorcycle" costing around $158. This had a mechanically-operated intake valve and Bosch high-tension magneto ignition, giving it more power. Its success was immense and Alcyon centered output on this model, which, with a new fuel tank and fork, was built until 1914.

The modern design of the Alcyon "Light Motor-cycle" ensured its immediate success, and it was produced until the outbreak of WWI.