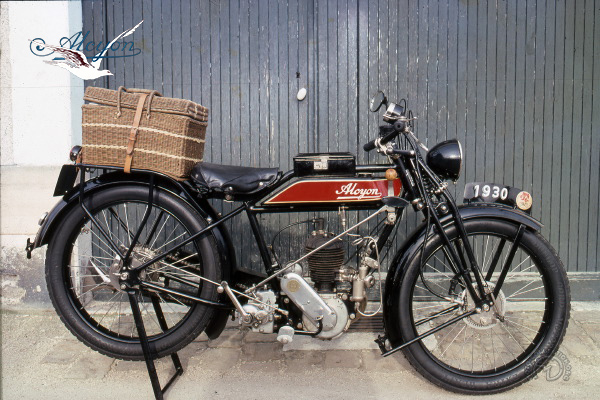 Though this flat-tank Alcyon may have looked obsolete in 1929, when saddle tanks had been commonplace for a couple of years, it is typical of the popular bikes of its day -simple, robust, and blissfully easy to maintain.

The Realm of the Two-Stroke

In this realm, two-stroke ruled. Alcyon was famed for its "high-swirl" engine with an unorthodox forward-pointing carburetor. A gesture to modernity had been the replacement of belt drive by chain on the 1929 models.

The well-regarded Alcyon factory was based at Courbevoie, a Paris suburb that was a center of car and motorbike manufacturing. Alcyon was French champion in 1928 in the 175cc and 250cc categories. In 1929, Alcyon triumphed in the 175cc and 350cc classes, using bikes with pushrod overhead-valve engines. Its comprehensive range included no fewer than 11 models at the time of the 1929 Paris Show: a new shaft-driven ohv 500; four-stroke ohv 175, 250, and 500cc ohv four-strokes; a sidevalve 350; and the most basic bikes available in the range, 175cc and 250cc two-strokes in standard and deluxe versions. This deluxe 175 had a three-speed gearbox and drum brakes, whereas the standard model only had two speeds and a single brake shoe acting on the rear belt rim. Electric lighting was an optional extra costing 435 francs ($78). The 175 Alcyon sold at 3,300 to 3,775 francs ($595 to $680), depending on equipment.

This well-restored 1929 Alcyon is still used by its enthusiastic French owner for touring; it traveled as far as Germany in the early Eighties.