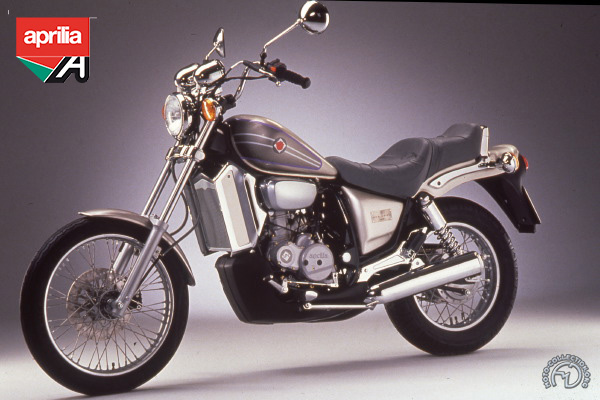 In recent years the young Italian Aprilia firm has been so successful in launching new styles in its buoyant homeland that today it is being copied by the Japanese!

After its brilliant success with a 125 Super Sport, as handsome and sophisticated as a Grand Prix 500, Aprilia pulled off another master stroke by creating a custom bike on the same base. No one would ever take it for a mere 125cc! The Red Rose has the presence of a full-size motorcycle and has succeeded in capturing the same laid-back, good-natured style that makes the big Harleys so attractive. With a little teardrop tank, a stepped dual seat, balanced shape and proportions, and a judicious mixture of chrome and colors, the Red Hose has all the features to attract a diverse clientele, for in many countries it can be ridden without a motorcycle license.

Leader of the Pack

The little Rotax 125cc two-stroke fitted to the Red Rose is the same as that of the Aprilia Super Sport, with only minor modifications. The bike can, when the occasion demands, transform itself into a snappy high-performance sports machine. Expensive but a lively image-booster, in 1992 the Red Rose found itself in the only category whose sales were increasing, the 125cc machines Â– and it had all the assets needed to be class leader.

Valves: automatic inlet valves in the crankcase; valve on the exhaust

The Red Rose is built to an infallible formula Â– it combines fashion appeal, style and performance.