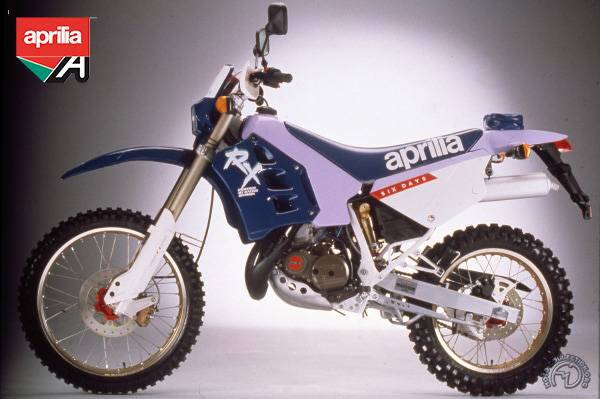 Machine of many takers

Trail bikes have adapted and specialized, and become available as replica motocross machines, African rally bikes or supermotard racers. Aprilia turned this progression on its head by creating the dynamic Six Days "replica" that, instead of being a refined trail bike, is a "civilized" evolution of a dedicated competition machine.

It's not always true that trail bikes built for endurance events can readily adapt to Jess demanding use. Competition mounts can be demanding in terms of maintenance, are noisy and make no concessions in terms of performance. They can lack the adaptability, comfort, practicality and long-term reliability of a highway machine. The aim with the Aprilia RX 125 Six Days was to create a genuine enduro machine Ā– oversized frame, sophisticated suspension, high-quality component parts, powerful Rotax engine Ā– that was just as usable on a day-to-day basis. To that end, it had road-going equipment and separate lubrication. Launched in 1990, the RX Six Days became, two years later, the "RX 125R Pure Racing World Championship Replica" with improved handling. It was the pioneer of a new category in which the Japanese marques are becoming interested.

The Italian Stefano Passeri placed third in the 1991 world enduro championship with this dramatic off-roader.