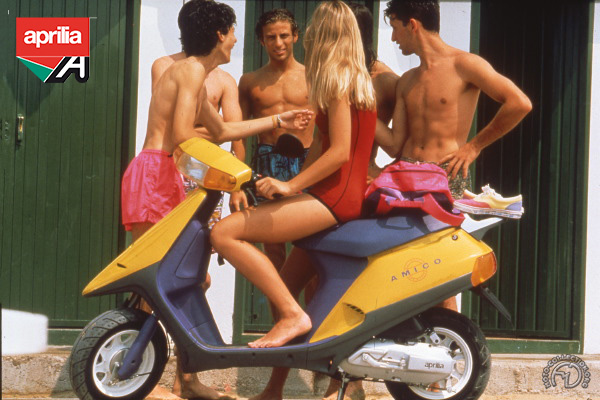 European motorscooters, particularly the Italian makes, have long held a kind of cultural cache, mainly in Italy and England. In England, the classic Italian scooters, variously modified, were the ride of choice for Mods, the youth movement popular in the mid to late Sixties. The look persists to the present, with bands of kids in short haircuts and slimly styled clothes cruising around London in rows on antique Vespas. Recently, the Japanese have begun to accomodate this obsession Â– although not necessarily in a Mod way Â– by forging partnerships with European companies.

In fact, the brightly colored new scooters, quite unlike their more dour Italian antecedents, are exclusively the products of Euro-Japanese collaborations: Honda and Peugeot; and, in the case of Aprilia, Yamaha, which also works with MBK. In a flexible partnership, Yamaha motors manufactured in Italy by Minarelli wind up in Aprilia's sporty Amico.

Not Fueled by Style

In contrast to the retro Italian scooters (which have their diehard defenders), Aprilia Amicos look more at home by Laguna Beach in California than they do outside a dance club in London. The storage compartment hides under the Amico's seat, and much of the bodywork is set in brightly colored synthetic materials. While no self-respecting neo-Mod would be caught dead on an Amico, plenty of kids less addicted to style have gone for the appealing little scooters in a big way.

Not exactly a cheap purchase (it costs more than many of its competitors), the Amico offers a thoroughly modern, although not Mod, color scheme.