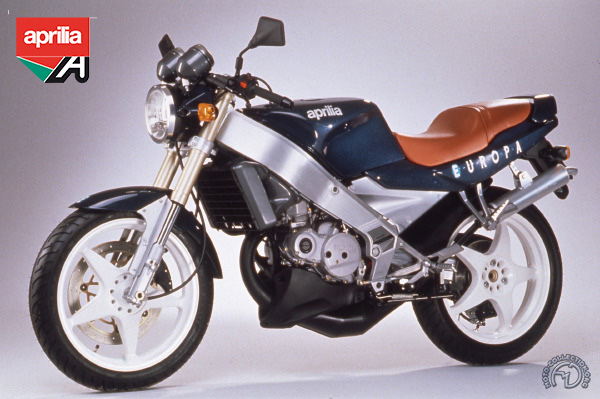 Aprilia began by making powered bicycles in 1975, and burst forth in 1984 by laying claim to the youth market in a large part of Europe. The marque Â– a symbol of renaissance Â– even announced in 1992 a joint venture with BMW for a new product range.

In the meantime, Aprilia followed every trend in the 125cc niche. Around the same power unit, a two-stroke single was developed for it by Rotax in Austria. Aprilia built a range of 125 supersports mixing ingredients worthy of Grand Prix machines, specialized off-roaders, and a custom bike that was as stylish as a Harley. This model, the Europa, a stripped-to-essentials bike, incorporated the same advanced technology as the Sintesi and Futura, dream bikes at an affordable price.

Revised in Every Detail

Far from being satisfied at having created a back-to-basics Futura, Aprilia went over its project in every detail. It used the same superb twin-beam, boxed aluminum frame with reversed telescopic front forks and single-arm rear suspension with bellcrank links to the single damper, but increased the comfort factor by using a genuine two-seat saddle, a less "boy-racer" riding position and more comprehensive instrumentation. The only negative factor was that the engine remained too highly-tuned for everyday urban riding or leisurely touring. On the other hand, the Europa was excellent on secondary roads, with irreproachable roadholding and braking and an engine that got better as the revolutions mounted.

Though its specification was exceptional, the Aprilia Europa was also extremely costly, and that prevented it attaining the anticipated sales.