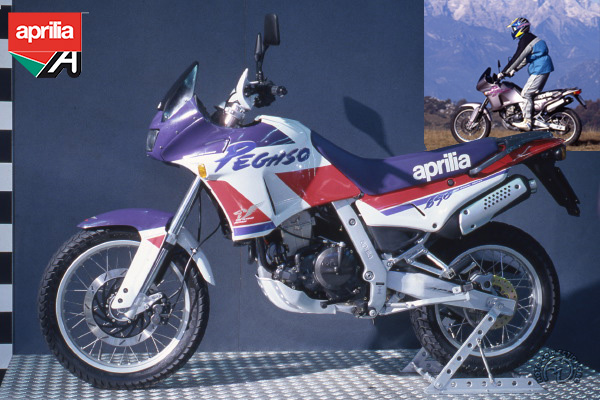 Having turned the world of the 125cc bike on its head for a number of years by marketing faithful replicas of its racing bikes, the young Aprilia marque again attracted attention by launching the most sophisticated big single of its day. Modern, elegant, immaculately finished in violent colors, the Pegaso was typical of the new race of road-going bikes directly inspired by dedicated off-road machines.

Lively and with good handling, this new generation of bikes places more emphasis on sheer riding pleasure than on speed alone. Even the Japanese haven't dared to go so far: more advanced than the engine of the Yamaha Ténéré (which was the first five-valve single), the Pegaso 650 power unit Â– developed in Austria for Aprilia by Rotax Â– doesn't miss a trick when it comes to modern refinements. It has twin overhead camshafts driven by Mors silent chains and five radially disposed valves Â– three inlet, fed by twin carburetors, and two exhaust. Rarely has the concept of a deep-breathing engine been better justified.

The cycle components are as innovative as the power unit, with an astounding mixture of aluminum for the twin backbones of the frame and steel for the lower cradle and the box girder behind the steering head which also serves as an oil tank.

Aprilia 's energy seems boundless and the marque is moving into new territory with the Pegaso range, built in 125, 600 and 6.50cc variants