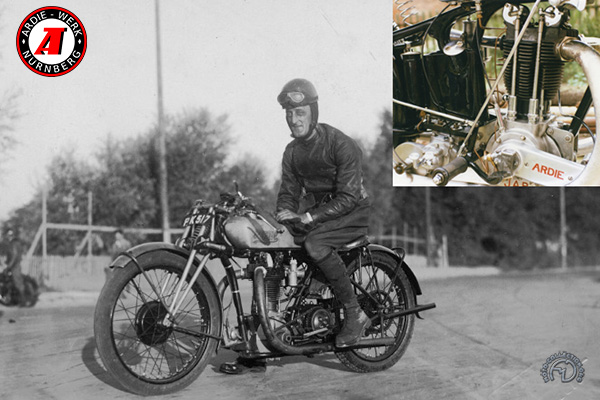 Founded by Arno Dietrich, Ardie began motor-cycle production in 1919 at Nuremberg, with a little 288cc two-stroke that was subsequently uprated to 304 and then 349cc for the final version of 1925. The original Ardie was painted bright red, so it was nicknamed "Minimax," after a well-known brand of fire extinguisher!

The Golden Age of JAP

In 1925, Ardie began using power units from the famous British engine manufacturer JAP in various sizes: 350 and 500cc side-valve singles powered the most popular Ardie models, but there were JAP-engined 674, 746, 981 and 995cc ohv or side-valve V-twins.

For Road or Track

Sold under the name "Sport Spezial," the 490cc ohv single was designed for use on both road and track. The neatly-finned, cast-iron cylinder and head were fixed to the crankcase (which looked like a competition unit) by four long studs. The racing aspect was further underlined by the carburetor, with its single-cable control and the size of the oil tank, for the total-loss lubrication system. It had an easily visible sight glass with adjustable drip feed for the oil flow. Ardie enjoyed great success with its JAP-engined bikes, particularly the 500. The works team was composed of three brothers: Georg, Halls and Konrad Thumshim. Georg won the Austrian TI in Vienna in 1926 and 1927 and the Hungarian TI, held near Budapest in 1927. Such successes boosted sales and allowed Ardie to invest in 1930 in the creation of a new frame of profiled aluminum, which was used, along with ]AP engines, until 1933.

Among the many European makes to use British ]AP engines, Ardie was particularly successful in the 500cc class with the Sport Spezial and its racing version.