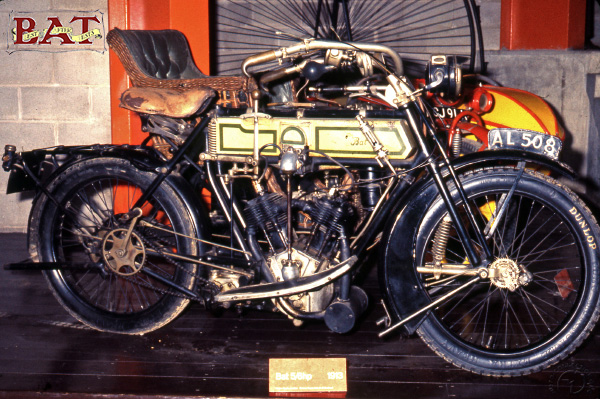 "Best After Test": The BAT marque, founded in 1902, could not have found a better slogan to promote its products, but the origins of the name were rather more prosaic. It was just an abbreviation of the name of S. R. Batson, the firm's creator.

No Need to Pedal

Still, BAT had a fine sense of publicity. It boasted that it had been the first company in England to have a vertical single-cylinder engine mounted in the bottom-bracket position. It was patented in France by the Werner brothers in 1901, the first not to need pedals - even on the steepest hills - and the first to offer suspension at both ends.

In fact, the 1903 BAT was suspended at the front end by a fairly efficient leading-link spring fork (a primitive ancestor of the Earles fork), while the rear of the frame was rigid. The term "fully suspended" was only justified because the saddle and foot boards were carried on a complex sprung sub-frame linked to the main frame. BAT enjoyed great success in racing, initially with De Dion engines, then with JAP power units, including a very special single-cylinder unit with overhead-valves and water-cooling. Despite its brilliant debut, BAT had fallen behind the times by 1913, with direct belt transmission, and on the Models 1 and 2, an obsolete gear-shift in the rear hub. On the other hand, the Model 3 had a separate three-speed gearbox. BAT, which suspended production during WWI, resumed in 1919 and took over Martinsyde before closing down in 1927.

This BAT Modell of 1913, with its wickerwork sidecar, features an ingenious sprung sub-frame carrying saddle and foot boards.