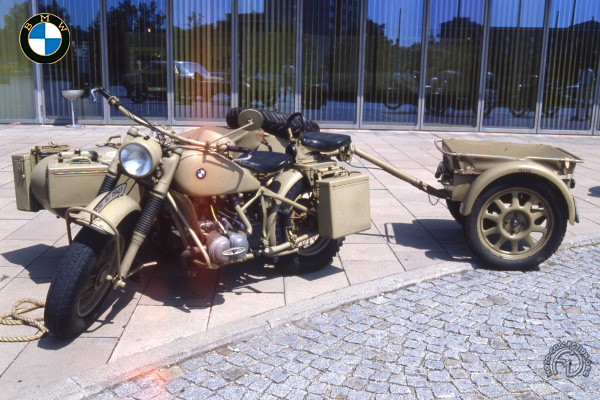 HitlerĀ’s Germany passionately believed in motorcycles and the BMW R75, better known as the "Type RussiaĀ”, is certainly worth Ā— along with its clos relative the ZĆ¼ndapp KS 750 Ā— of being called the most handsome military motorcycle ever built. It was unstoppable Ā— except by the snow of Stalingrad!

It was designed between 1931 and 1941, and 16,500 examples were built before the destruction of the Eisenach factory by bombing at the start of 1944. This amazing machine Ā— as rare today as it is expensive Ā— had an off-read performance superior in many respects to that of the Jeep. The specification is impressive: a range of 225 miles, a maximum highway fuel consumption of 52 miles to the gallon (US), empty weight of 962 lbs, and a payload of 1014 lbs.

Working for the Reich

BMW and ZĆ¼ndapp, working together for the Fatherland, borrowed heavily from French and Belgian designs to create a sidecar with a permanently driven wheel. A complex arrangement used a split-torque differential so that different torque was transmitted to either wheel. Designed down to the last detail, the BMW even had a device for warming the riderĀ’s hands and feet and a high-level air filter allowing the machine to plow through deep mud.

Widely sought after, the BMW R75 is one of the most highly prized collectorĀ’s motorcycles.