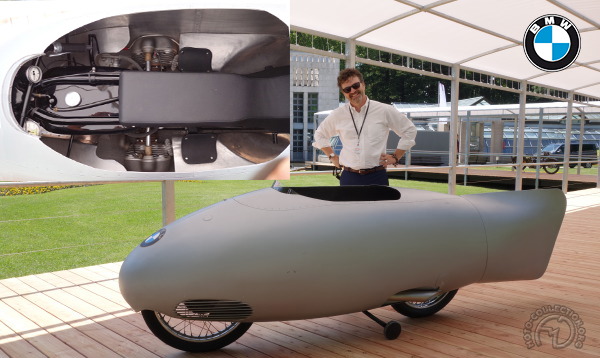 When BMW attacked the motorcycle speed record in 1929, it was with a supercharged 750 derived from the production R63, ridden by Ernst Henne, champion of Germany for 1926-27 and winner of the 1928 Targa Florio. He reached 134.69 mph despite major tire problems. That was over 6 mph faster than the English rider Bert Le Vack and his 1000 supercharged Brough-JAP, the acknowledged specialists in the field.

The English turned a blind eye and regained their mastery of the situation when Henne achieved 152 mph in 1932 with a new Cozette-blown 750. The British menace was ever-present, but BMW nonetheless reacted with a novel machine for 1936. It only had a 500cc engine and an overhead camshaft. The motorcycle was streamlined, with the rider entirely enclosed in a long-tailed shell under a transparent cockpit cover. Inside this unstable "cigar," Henne exceeded 169 mph.

The Briton Eric Fernihough and then the Italian Piero "Silver Fox" Taruffi both set new speed records the following year, forcing Henne back into the saddle to respond with a magnificent 173.68 mph record on November 28, 1937. This version, without the streamlined cockpit cover but with a tailfin, was developed in the wind-tunnel by a leading aerodynamicist of the day, Reinhard von Konig-Fachsenfeld. It was not until1951 that Wilhelm Herz and his blown 500 NSU inscribed a new name in the record book with a record speed in excess of 180 mph.

The record set by the 1937 record-breaking BMW, the result of a dedicated aerodynamic program, would stand for another 14 years.