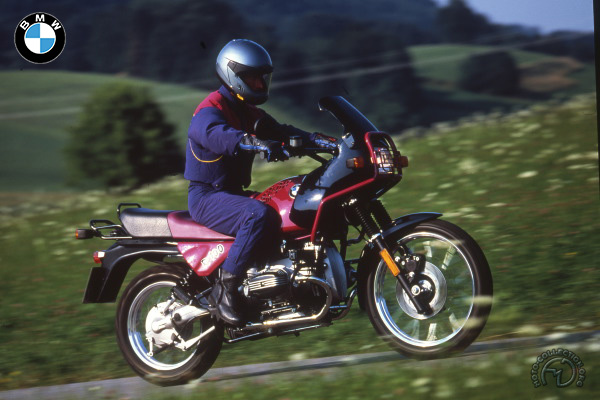 The call of the wild

Despite their reputation as superb touring bikes, BMWs have always been involved in off-road competition. Since 1929 BMW has participated in the International Six Days' Trial and been involved in enduro racing for over half a century.

After some private entries had demonstrated the efficacy of big engines in the wide-open spaces, the BMW factory participated in the classic Paris-Dakar rally usually dominated by Japanese singles. Victories soon followed: in 1981 and 1983 for Hubert Auriol, followed by Gaston Rahier in 1984-85.

It was a dramatic lesson for the Japanese and Italians. Profiting from this show of strength, in 1985 BMW launched the R80GS. (GS is for "Gelande Sport" Â— "cross-country sport.") It was the biggest trail bike of its day. The R80GS became the R100GS in 1988, with the addition of a major innovation: Paralever. The single-arm rear suspension of 80GS received an upper arm and a reaction bar, creating a deformible girder fork. "Freezing" of the rear suspension due to the action of the drive-shaft during acceleration was suppressed. The R100GS, styled by Target Design, was sidelined in 1983 by a "Paris-Dakar" version equipped with an engine shield, a "cowcatcher" and a full fairing. Ironically, BMW long ago pulled out of African rallies under extreme pressure from the powerful "green" lobby that exists in Germany.

BMW's R 100GS is a true grand touring bike, ready to go to the ends of the earth.