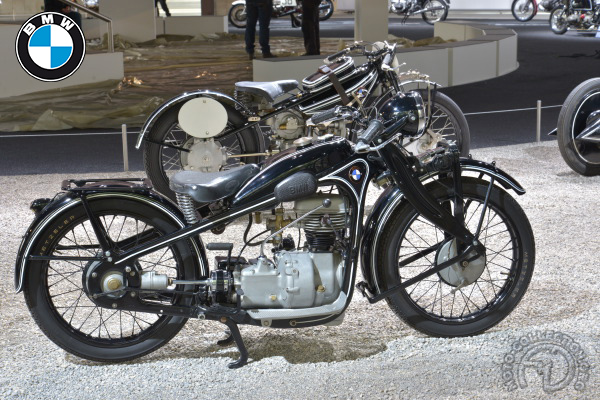 A major surprise of the 1930 Berlin Show was the launch of the BMW R2. Compared with the marque's big bikes, the R2 seemed more like a big toy, though it was fully worthy. BMW had deliberately broken with established concepts and adopted the most sophisticated techniques in order to create a motorcycle that was clean, practical and demanded the minimum of maintenance.

The words "unit construction" were fully justified, with a crankcase with a one-piece rear casing, to which the gearbox was bolted. The bottom part of the cast iron cylinder was encased in this crankcase.

Three chromed tubes linked the crankcase and the aluminum cylinder head; the outer pair encased the pushrods while the center one was an oil breather. However, until l932, the pushrods and rockers were unenclosed! The power unit was mounted in a neat pressed steel frame, with the company's celebrated shaft drive, making this one of the most attractive small motorcycles of its day. However, all this refinement raised the cost of the new BMW single to prohibitive levels: it was three times the price of a DKW and these were difficult years for the German industry. Notwithstanding that, the 200 R2 remained in production in 1931-36 and over 15,000 were sold, more than any other previous BMW motorcycle. One advantage was that it fell into a class that was exempt from road tax.