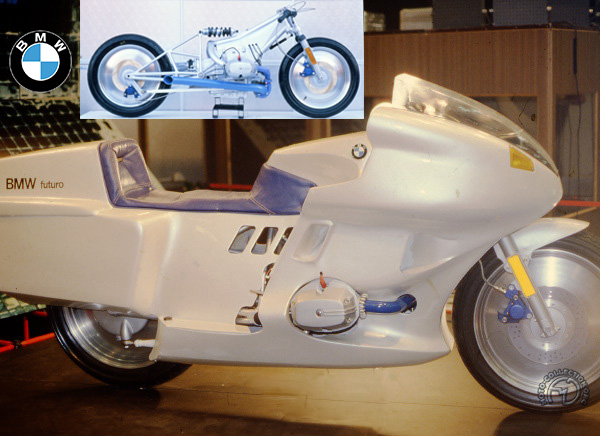 "The Futuro was unveiled at the Cologne Show in September 1980, a show that saw the debut of the Honda CX Turbo, the Suzuki Katana and the first Yamaha V-twins. Naturally, these "real-world" machines overshadowed BMW's "dream bike" built around the old flat-twin engine.

But the Futuro was worthy of better things, and the Ki, launched eight years later by BMW, was obviously indebted to it on both the aesthetic and the technical fronts. Of course, the Ki had outgrown the turbo technologies that were all the rage when the Futuro was developed, but it represented a high point in turbo development that has rarely been equalled.

If the girder frame of the Futuro has not yet paid off, this show bike did mark the first use of the parallelogram rear suspension that has become commonplace on BMWs since 1987. It was in terms of style, however, that the Futuro most foreshadowed contemporary motorcycles. With its disc wheels (often found on custom machines), its saddle wrapped around the fuel tank, its rear trunk (which inspired the Honda Pacific Coast), its wraparound cowling, and its integrated rearview mirrors, it was a forecast of bike shapes for the Nineties. Though its first showing was also its last, it still cleared the way for successors.

Gaze into the futureĀ… Maybe the Futuro was too far ahead of its time, but it gave a pretty good idea of the shape of things to come.Ā”