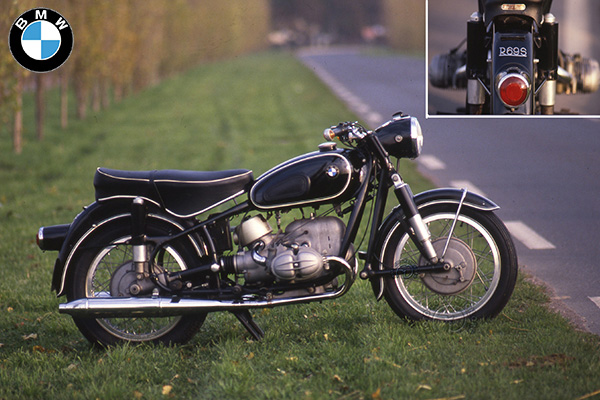 Between its launch in 1960 and its withdrawal from the market in 1967, the BMW R69S Â— flagship of the German marque Â— was the only large-capacity sportster available to counter the British big-twins in epic, impassioned exchanges.

The two schools had nothing in common. The leading English makes Â— Norton and Triumph Â—were vertical twins with separate gearboxes and chain transmissions. The legendaryy BMW was a sober-sided machine with a flat-twin power unit and shaft drive. More lively and entertaining than the German machine, the British sporsters were also more temperamental and marked their passage with the occasional oil patch. The BMW was at least as fast, efficient, clean and quiet. It did not possess the total reliability of the less highly tuned R50/2 and R60/2 versions, but it was incontestably durable.

Externally, the R69S was virtually identical to the tamer R60/2, apart from its discreet chrome script on the rear mudguard, its hydraulic steering damper, its valve cover with two fins instead of six and a bulge on the front of the crankcase. The last detail was the one that mattered the most; it concealed a little inertia flywheel vibration damper on the end of the crankshaft, which ran in long roller-bearings the better to withstand torsion. That was one of the many technical details that were specific to the performance of the S type.

The legendary R69S was the only big German sports bike of its day and it was as expensive to buy as it was uneconomical for BMW to build.