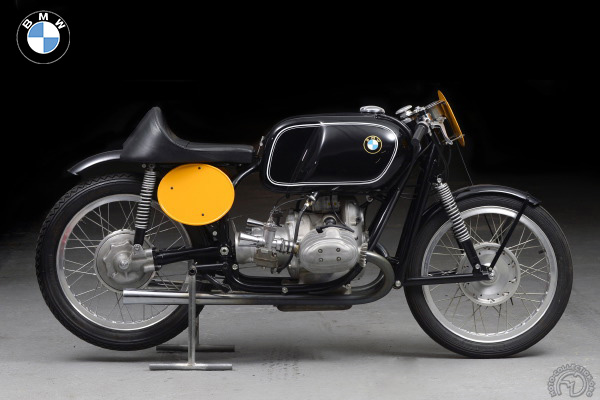 As a result of GermanyÂ’s defeat in WWII, the country was barred from competing in international racing until 1951. Then BMW reappeared on the circuits with machines directly derived from the successful prewar blown 500, but with the supercharger removed to comply with the new regulations. It was not until 1952 that the manufacturer was able to produce a new racing bike, the 500 Rennsport, known as the 500 RS.

In 1953, the solo RS Â— noteworthy for its modern frame, with Earles front fork and swing arm rear suspension, in contrast to the telescopic fork and plunger rear end of the sidecar version Â— was exclusive to the works riders Baltisberger, Mette, Zeller and the Meier brothers.

Available at a Price

Engine-wise, BMW retained its distinctive layout of twin overhead-camshafts acting on the valve stems through short rockers, but the engine had "square" dimensions, and the crankshaft ran in three roller bearings. Engine, gearbox and final drive were far more compact than previously, and the weight was down. In 1954, BMW sold 500 "client competition'' versions of the 500 RS Â— at a steep price! The main difference lay in the engine which was slightly undersquare. Initially a telescopic from fork was fitted, but it was very quickly replaced by an Earles. A modified version of this production RS became the official mount of Walter Zeller up to BMWÂ’s withdrawal from racing at the end of 1957, but even all his talent could not prevail against Gilera, Guzzi and MVAgusta.

The RS engineÂ’s power output could be boosted to over 60 hp with different cams and big DellÂ’Orto carbs.