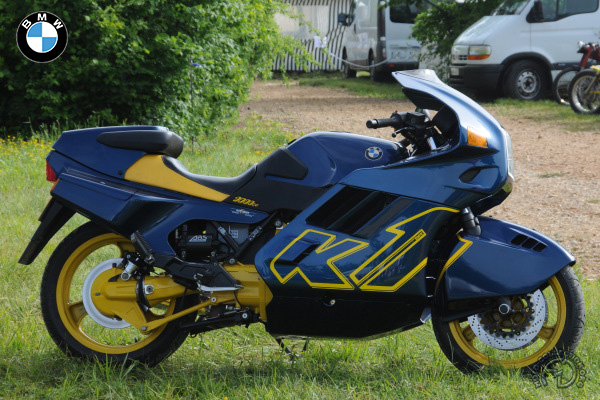 "The introduction of this new model, with its totally innovative appearance, caused a sensation, particularly since it came from BMW, normally so careful to respect its own design traditions. The astounding K1 - under development since 1983 and unveiled in 1988 - was the result of BMWs constant research program.

Designed in the Wind Tunnel

The classical styling of their models often incorporated carefully studied aerodynamics, but in the extreme case of the K1, BMW chose to ignore both current fashion and the conservative taste of their traditional clients. BMW would be guided by the functional standards dictated by wind-tunnel studies. The K1 was the final descendant in a long line that went back to Ernest Henne's streamlined record-breakers of the Thirties (174 mph in 1937) through the R 100 RS of 1976.

Exhibiting a sculpted look, the K1 sported a streamlined front tire and, in wind-tunnel tests, recorded a record low drag coefficient of 0.34. The maximum speed benefited considerably: the K1 could achieve almost 150 mph on just 100 hp. A pure sporting machine, the K1i was more of a grand tourer than the replica racers the Japanese loved. It could comfortably carry a passenger, had built-in luggage lockers, and even offered 250 cubic inch baggage compartments as an option.

The KI is the descendant of the streamlined, record-breaking BMWs of the Thirties.