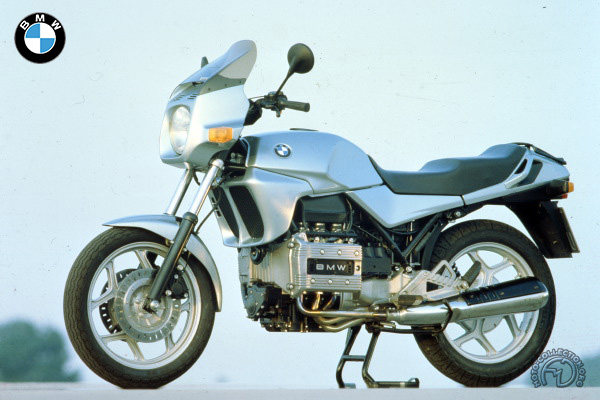 Very few three-cylinder motorcycles have ever been made, though this layout has definite advantages, particularly its compact size and near-perfect balance (though a crankshaft with throws at 120 degrees is costly to make). However, when BMW adopted this unusual layout in 1981, the primary motive was to enable the company to extend its range.

The 1000cc four had appeared in 1983, and the K75, which joined it in 1985, used as many common components as possible. The internal measurements of the engine were the same as the 1000 but the engine/transmission unit was very compact and weighed 22 lb less. Like the 1000, the K75 was equipped with a highly-sophisticated electronic fuel injection system. That gave it great flexibility and livelier response than the four.

Thanks to its low saddle height and center of gravity, the K75 handled very well, with a compromise between comfort and road-holding. Though its power output seemed modest compared with the Japanese machines, the K75 did not pretend to be a sports bike, being more an all-round machine that was equally an everyday mount as a long-distance tourer. The 750 range first appeared in 1985 in two versions: the unadorned K75 and the K75C, with its small headlamp fairing augmented by the addition of a radiator cowling styled like the radiator grill of a BMW car. A few months later came the K75S with a cowling fixed to the frame, triple disc brakes and a 17 inch rear wheel.

BMW is especially famous for its top-of-tbe-range models, but the K75C proved itself to be an excellent compromise.