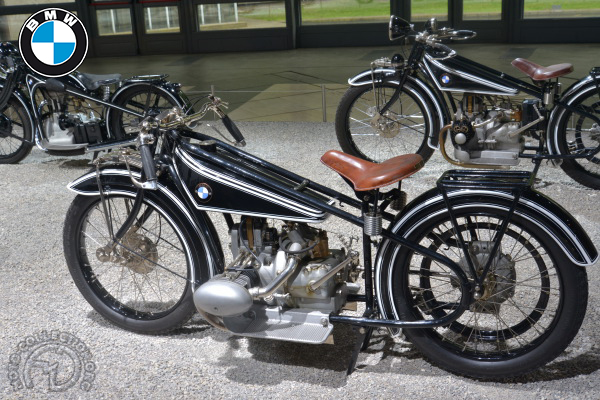 The BMW R37, which was the basis of a whole series of models, was the first sports machine from the Bavarian constructor, and as BMW's publicity claimed, it was "the aristocratic motorcycle for the aristocratic sportsman."

BMW had decided to unleash the sport potential of the first of its flat-twins Â— the R32, an unpretentious side-valve 500 developing 8.5 hp at 3300 rpm Â— and entrusted the task of developing a high-performance derivative to engineer and works rider Rudolf Schleicher.

BMW originally built aircraft engines, and Schleicher adapted the 90-degree inclined overhead-valve hemi-head layout used on BMW aeroengines to fit the motorcycle cylinders, doubling the power rating at a stroke. The gearbox was kept, as was the frame. BMW redesigned the machine after two years to create the R47, with an extra 2 hp, a transmission brake and oil lubrication of the gearbox and final drive via a shaft. Schleicher started BMW's long tradition of sport success with his victory in the 1926 International Six Days' Trial, the first time that a German bike had beaten the British machines. Ten R37 racers were built; their tuned engines with alloy cylinder heads and twin carburetors produced 20 hp at 4800 rpm. Improved frames had large-diameter brake drums.

During its two-year model run, just 175 examples of the BMW R37 were produced out of a total output of some 4000 motorcycles.