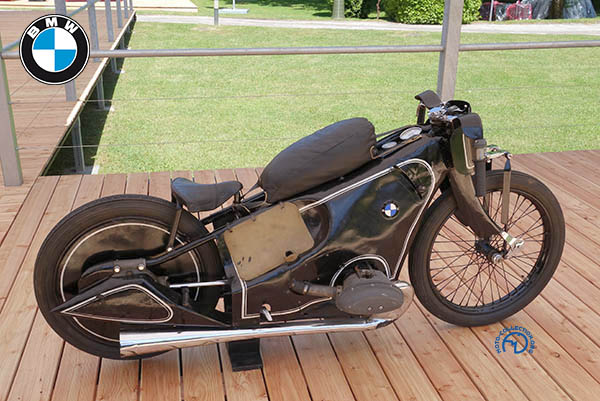 Speed records have long been the most prestigious form of publicity. They were regarded as the exclusive territory of American and British machines, and it came as a rude awakening when, in 1929, BMW smashed the existing speed record by 6 mph, reaching 135 mph over a flying mile. Even more shocking, the machine which had unseated Bert Le Vack's famous 1000cc Brough Superior-JAP was only a 750!

BMW's big secret was aerodynamics: Its forks were streamlined, the rear wheel was covered by discs and the frame was completely faired-in; only the cylinders were exposed. The flat-twin power unit was fitted with a mildly geared-up Zoller vane-type supercharger, which blew at 1.2 atmospheres, doubling power rating from 36 to 75 hp at 6000 rpm.

There was no front brake nor rear suspension. Even famed speed ace Ernst Henne's saddle was unsprung. Clad in skin-tight leathers to minimize wind drag, Henne wore a stream-lined helmet, and a streamlined cone was strapped to the seat of his trousers! In 1930, Englishman Joe Wright's Zenith-JAP reached 150.7 mph, a record which stood for two years before BMW responded with a speed of 152 mph. In its final version, its engine ran on a lethal alcohol-based cocktail of acetone, nitrobenzene and ether. In 1936, Henne reached 180 mph one-way, on a machine of only 500cc Â— his average was 169 mph. Finally, riding a fully-streamlined machine, Henne achieved nearly 174 mph in 1937.

The final version of the 750K, which took Ernst Henne to many records during a four-year period, in which he reigned alone as world record-holder.