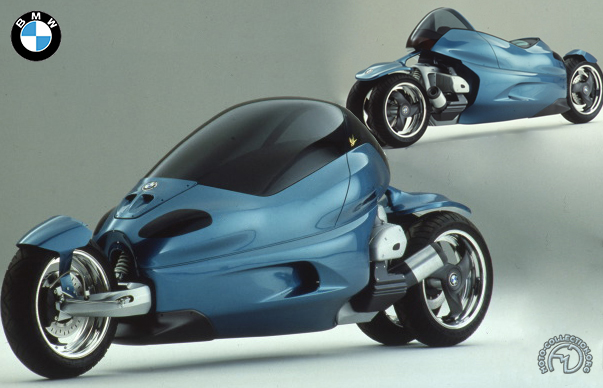 Sliding into the future

1991 saw BMW's curious introduction of a prototype three-wheeler that recalled youthful tricycles Â­Â— even though the tricycle now sported a 1000cc air-cooled engine tl1at could blow most other kids right off the block. The power was not without styling Â— a smooth, sweeping body and a full canopy gave the BMW "Tricycle'' a decidedly futuristic look.

Not Without its Relatives

The new BMW "cycle" owed a lot to the Ariel of 1970 and Honda's prototypical Gyro-X from the Eighties. Inclined for the rider, the sloping lines of BMW's Three-Wheeler kept the tires in a dean vertical plane, and the striking canopy could be removed when the open air was what the cyclist of the future coveted.

In an age when many new pieces of technology are exhibiting a Star-Trek flair, with sculpted lines and sinuous forms, it is still rare for anything that seems too "new" to find its way into the real world of getting and spending. Although most consumers will never have the chance to ride this specific BMW, they may someday find themselves astride one of its derivatives, tooling down a twelve-lane Autobahn outside 21st-Century Munich.

A typically "out-thereÂ” prototype, this time from BMW. Still, derivations of this design may be seen on the roadways of the 21st Century.