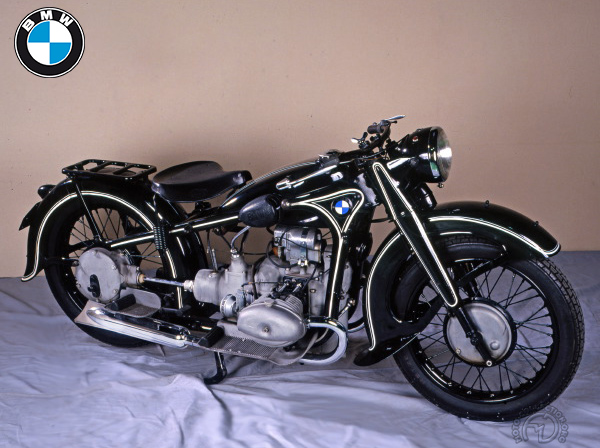 The First BMW with Pressed-Steel Frame ...

In 1929, the R62 was replaced by the R11, which was broadly similar but had a pressed-steel double-cradle frame that started a trend throughout the industry and was used by the majority of manufacturers, especially in Germany. Once again, a side-valve version was paralleled by an overhead-valve model, the R16, with the same bore and stroke as the R63.

The major innovation on the two new 750s launched in 1935 Â— the R12 and R17 Â— was their hydraulically-damped telescopic forks. It was the first time this type of suspension had appeared on a mass-produced motorcycle. Still with an oversquare engine Â— more suitable to the high speeds of which an overhead-valve machine was capable Â— the R17 had practically the same power unit as the earlier R16 but was fitted Â— like the R12 Â— with a new four-speed gearbox controlled from the tank by an automobile-type shift lever pivoting directly in a turret on the gearbox lid. It remained in production until 1937. Very expensive Â— but prestigious Â— the R17 was the most powerful motorcycle built by BMW until its 600cc R68 of 1952 and the last overhead-valve 750 from the marque up to the R75/5 of 1969.

The peak of German technology in the mid-1930s Â— the BMW 750 R17 was an expensive motorcycle, while the side-valve R12 was less costly.