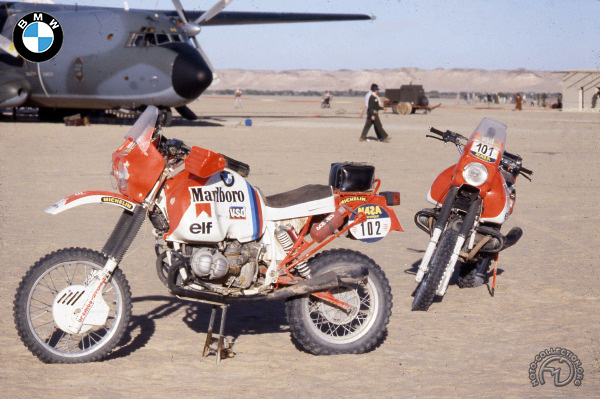 BMW took part in the second Paris-Dakar rally in 1980 with Fenouil and Auriol as riders, and won for the first time in 1981 with Hubert Auriol, who repeated the feat in 1983. BMW took the first rwo places in 1984 with Gaston Rahier first and Hubert "the African" second, and won yet again in 1985 with Rahier. The German flat-twins prepared in France seemed unbeatable so, to go with the flow, all the other factories hastened to ditch their singles in favor of faster twin-cylinder machines.

The End of an Era

The 1986 Paris-Dakar was a subdued affair, for the creator of the event, Thierry Sabine, was killed in a helicopter accident. It also marked the end of the reign of BMW. The rally, which covered some 9300 miles in less than twenty days, was dominated by the new V-twin Hondas of Cyril Neveu and Gilles Lalay. Out of three competing BMWs, those of Eddy Hau and Gaston Rahier could do no better than eighth and fourteenth positions.

Rahier, the Man Who Never Gave Up

Gaston Rahier, a slightly-built Belgian with a string of motocross victories to his name, took part in his first Paris-Dakar in 1983 and remained one of its stalwarts from then on. He left BMW in 1987 to establish the Suzuki competition department; in 1986 Hubert Auriol also left BMW to join the Italian Cagiva team.

With its Paris-Dakar bikes, BMW invented a monumental machine weighing some 550 lbs, which retained the liveliness and sheer grunt of a motocross bike.