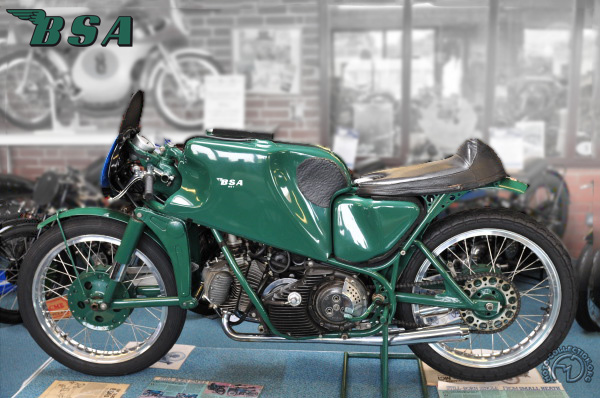 "It's a better bike than a 350 Norton Manx and can challenge the invincible Moto Guzzi and NSU for the world title!Â” said the famous racer Geoff Duke after he had tested the prototype MCI in 1953, but in spite of its extraordinary potential the MC1 never raced.

Corks in the Exhaust

As technically interesting as it was, the 250 MC1 was far from ready to race. It was difficult to start, due to excessive valve overlap which gave poor compression at low engine speeds. Corks had to be put in the tailpipes, which Geoff Duke pulled out as soon as the engine fired! When it ran, the MC1 was certainly extremely rapid but the carburetion was faulty, there were resonances in the exhaust, and the engine only ran between 8000 and 11,000 rpm!

This horizontal single cylinder was the work of Doug Hele, head of the Norton racing department, which the new AMC group had just transferred to BSA. Hele had designed a novel industion system for the MC1 with four radial valves operated by rockers from twin overhead camshafts driven by shaft and bevels. Low and compact, the MC1 also had a very modern frame made up of upper and lower double cradles which intersected behind the steering head to support the front suspension.

Lower, lighter, and faster, the MC1 could have been a challenger to the Manx Norton.