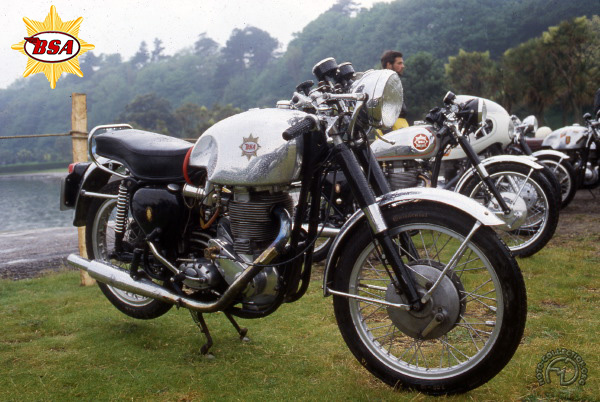 The "Goldie," as it was known to its fans, was one of the most famous supersports bikes after WWII. It achieved success in just about every field possible: in its 350 and 500cc versions, a supersports road bike, an excellent circuit racer, a first-rare trials machine and a top-class motocross mount. It was even an outstanding sidecar trials machine. Few machines have enjoyed such a varied record of sporting success.

The postwar Gold Star appeared in 1948, its engine closely based on the touring B31 and B32 Series. In 1949, its simple rigid-cradle frame acquired plunger rear suspension, and the 500 distinguished itself that year in the International Six Days' Trial, in which it collected 11 gold medals. In the first ACU Clubman's TT, a 350 Gold Star ridden by Harold Clarke won the new trophy at 75.18 mph. The BSA dominated this race between 1949 and 1956; in 1955, out of 37 entries, 33 were Gold Stars!

Too Successful for Its Own Good

A fundamental trouble with the Gold Star was that it was too successful. It lacked adequate competition in the racing class, and the Clubman's TT was abandoned in 1957. The ultimate version of the Goldie had a double-cradle frame, swinging fork rear suspension and 8 inch front brake. Clip-on handlebars and swept-back exhaust were standard on the 1955 Clubman model. BSA built its last Gold Star in 1962, claiming that the model had become too expensive to produce.

With its optional aluminum fuel tank, this 1956 Gold Star stands out from the standard version parked alongside.